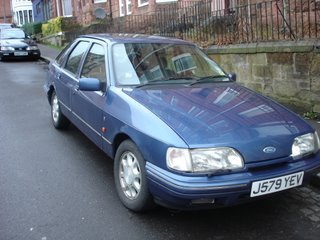 Well. Times were hard, the Volvo’s MOT was just about up and there was not much chance of getting her fixed in the near future.

The capri was put up for sale to raise some funds. I was offered this in exchange for the capri.

First impressions on arival were a bit so so… But after a week of driving I was fairly happy with the deal. It needed an exhaust and the brakes were supposedly in need of attention.

That was sorted for the MOT and it passed with no problems.. The car seems to be going quite well.

The bodywork has a number of large panel defects which is a shame, I unfortunatly added to them when I caught the drivers door on the gate post and bent the hinges..

Overall it’s not bad.. It’s solid underneath and the engine is smoke free and pulls ok. Autobox is a bit vauge sometimes though.